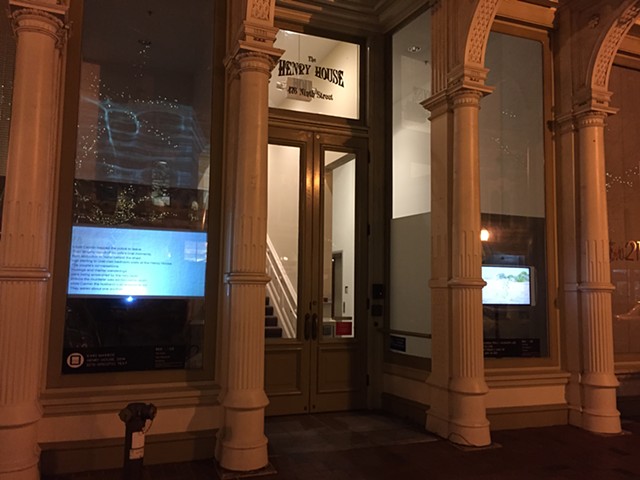 Kari Marboe's Henry House, a video named after the building where her piece for RESOURCE was located, focused on how past residents transitioned into the space, what they did there, and how to access memories stored within layers of paint on the walls. Research for this work was done at the Oakland Public Library, and relied primarily on Oakland Tribune articles.

Excerpt: Isadora Duncan and her family shifted from Geary Boulevard to Henry House trying to escape the hounding creditors left by her vanished father. Her mother, brothers and sisters used the structure for shelter and security. While they created height charts to trace the passing of time, Isadora’s hands brushed against each wall leaving marks of Delsarte’s movement philosophy and redefining their environment entirely.

J.N. Hoyt registered at the Henry House under a false name. It was J. Norman who committed suicide. No visible note or clue was left behind. Everything that ailed him had instead been yelled or whispered, absorbed not by ears but cracks and textures in the walls. The body was found by house attendants identified by a bank book and letter from his son. It was only when William Hoyt sat in his father’s room leaning against each wall that any motivation was understood.

Mrs. Rogers and Mrs. York shared a wall. It was the thinnest and most useful one in Henry House. The women held circles next to it twice a week acting as healing and test mediums with the whispered help of the other. Details of betrayals, affairs and triumphs traveled through the structure easily. Though at times sentences stuck in between, fusing to the paint and insulation, leaving a pause in the conversation. -Kari Marboe, Henry House