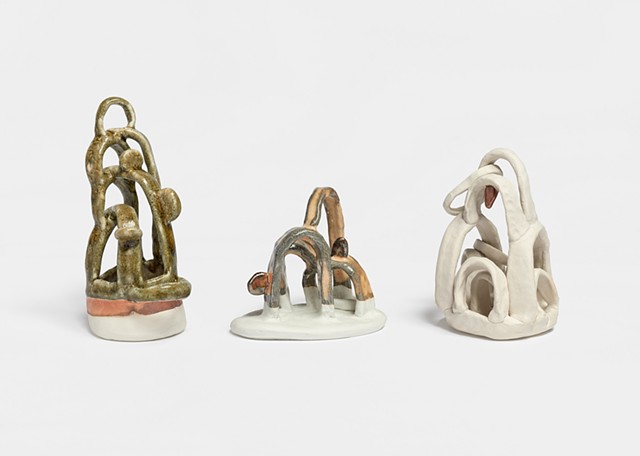 One artwork by Daniel Rhodes in the Greenwich House Pottery Collection is from 1960 and has the title “Fish face. Jack Dempsey, whale pot. It’s a whale of a pot! Piranha pot!”. This is an unusual title for Rhodes’ practice, as is the squished basketball shape of the piece with the most distinct feature being the mouthlike slit on one side. There are two condition reports that accompany the vessel’s photographs. One recalls the state of the piece as being “excellent” while the other is noted as “good.” I let the sentiment of the words, as well as new combinations, guide the forms of my next round of sculptures. Out came a series of fin-covered, looping sculptures.  I used the porcelain paper clay as a nod to the development and use of additives Daniel Rhodes is known for using in his work and also speaks about in Clay and Glazes for the Potter. The porcelain paper clay recipe and technique was shared with me by Lisa Chicoyne, artist and instructor at Greenwich House Pottery, while we had lunch a few blocks from the studio last summer.