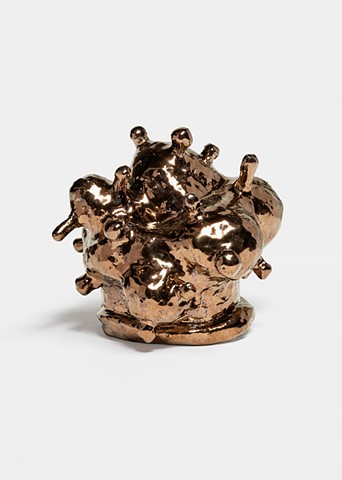 In March 2019 I traveled to Alfred University in upstate New York where Daniel Rhodes received his MFA and taught from 1947-1973. After an introduction from Michael Swaine, who did his BFA at Alfred, I met and stayed with Andrea and John Gill, two artists and Alfred professors. Andrea and John’s kindness and intelligence resides within every object and every surface of their house.

Impression is based on conversations I had with John Gill in his green room adjacent to the kitchen and in the car when he took me on a tour of the area. We spoke about form, Rhodes, Alfred, diners, history, laundry, and stretching yourself to get to your ceramics. He told me not to be timid about getting there.

I believe that it is important for artists not to make a premature commitment to a narrowed objective before they are ready. Granted, such a commitment may make the work more easily recognized, but a narrowing of focus should come from inner necessity rather than from calculation. Worst of all is the temptation to tailor one’s work to some au courant image which later may prove to be uncongenial. I regret now that I didn’t dig deeper into some of the various promising mines that I opened up. But in art one must follow one’s hunches. -Daniel Rhodes, Ceramics Monthly, September 1987