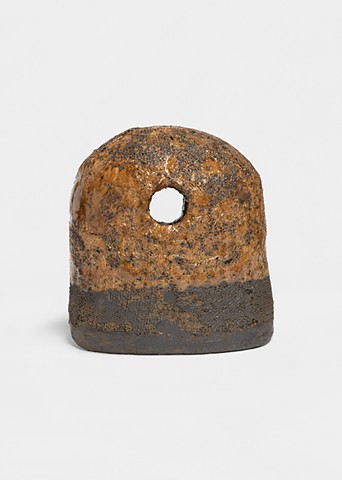 Daniel Rhodes taught ceramics at Alfred University, New York, for 25 years and published six books on technical ceramics. His book Clay and Glazes for the Potter, first published by the Chilton Book Company in 1957, is a widely used textbook on ceramics to this day. In the 1957 First Edition there is a description of the fiberglass technique being invented and perfected by Rhodes. The 1973 Second Edition description was updated and focused on the dangers of fiberglass use. Other additives such as burlap and nylon fiber remain safe. I used the technique with burlap dipped into slip to make the surface of Reconstruction 1 and placed it on my own form - a sculpture you can look through for a moment that is both public and private when locking eyes with another person. I was searching for a way to be closer to Rhodes and the methods that created his missing work.

Even though clay has been worked for thousands of years in all kinds of ways, the possibility still exists for the emergence of new methods of dealing with it as a plastic material...In my case, my discovery that clay could easily be reinforced with fiberglass strands or cloth opened up a whole range of forms which before I had only been able to imagine...A new family of shapes seemed to grow out of the behavior of the material rather than from some program devised by rational thinking. -Daniel Rhodes, Ceramics Monthly, September 1987