On October 27th, 2013, Erin Colleen Johnson and Kari Marboe collaborated with Sunday Streets to bring the Richmond district their Mobile Wishing Well. As the caster-footed well rolled along the Sunday Street route community members were invited to participate by making a wish using the Mobile Wishing Well’s coins and discussing their wish making traditions.

"Our Mobile Wishing Well at Sunday Streets invited people of all ages to grab one of our unmarked "coins" and toss it into the well while making a wish. Over two hundred wishes were made as we rolled along the route and numerous traditions and desires were discussed. I saw coins being tossed from two feet away, coins clasped between two praying hands and gently dropped, and coins flipped from thumbs, always landing with a splash. Most of the wishes were kept a secret (there's a fear that they will not come true if spoken), but there were twenty or so that were directly told to me, two of which came from mothers who wished for more sleep. Only one older woman gave the coin back to me, saying that she had been wishing for the same thing year after year and it refused to come true. She walked half a block down the street before coming back, closing her eyes, and letting her coin fall into the water." - Kari Marboe.

Sunday Streets Sunday Streets are events that encourage recreation, community activities and fun in San Francisco. Sunday Streets closes stretches of city streets to automobile traffic, and opens them to people for several hours on a various Sundays throughout the year, so participants can enjoy a large, temporary, public space where they can bike, walk, run, dance, do yoga, or do any other physical activity.

Project funded by the Awesome Foundation Created in the long hot summer days of 2009 in Boston, the Foundation distributes a series of monthly $1,000 grants to projects and their creators. The money is pooled together from the coffers of ten or so self-organizing “micro-trustees” and given upfront in cash, check, or gold doubloons. The chapters are autonomous and organized by the trustees around geographic areas or topics of interest. Since its humble beginnings, many Awesome Foundation chapters have sprung up globally to conserve, sustain, and support the worldwide ecosystem of awesomeness. Projects have included efforts in a wide range of areas including technology, arts, social good, and beyond. 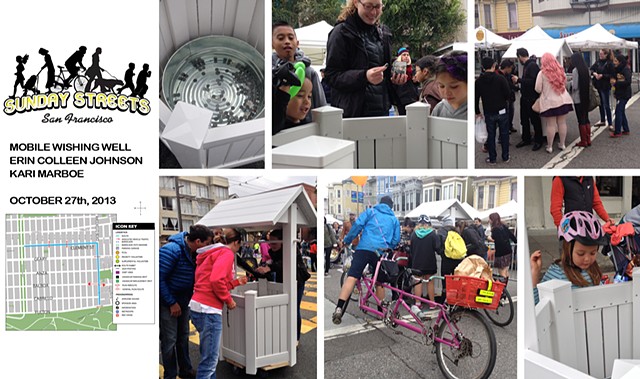